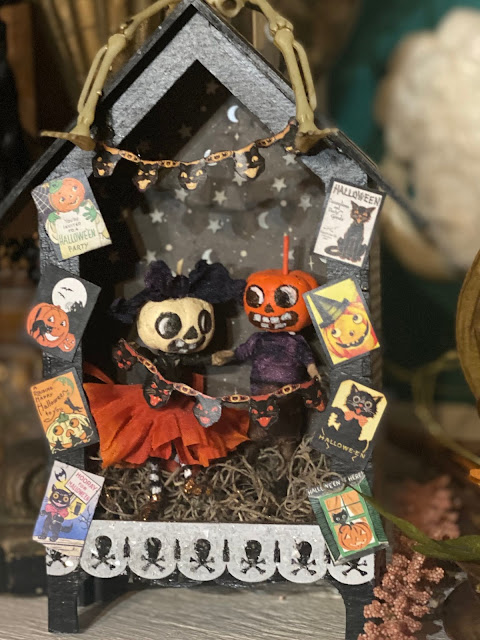 (The pumpkin head dolls kill me!) 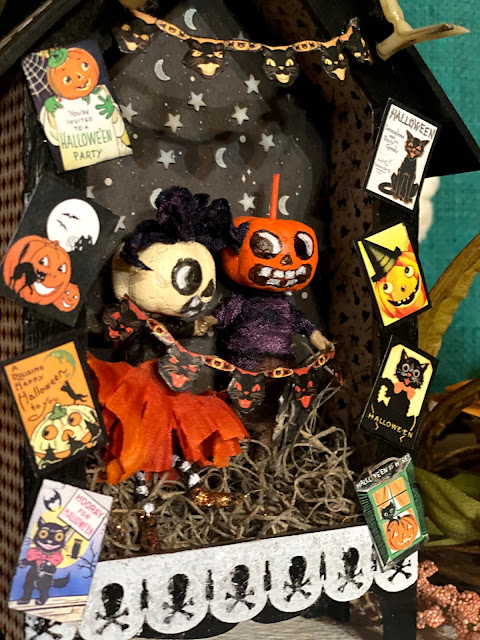 The pumpkin head dolls actually happened on a whim, I just kept seeing faces on the pumpkins when I first saw them, the pumpkins are a nice size and the foam is easy to draw on (with a felt-tip pen). So of course they'd need bodies too, amiright??
Let's get started on the dolls! 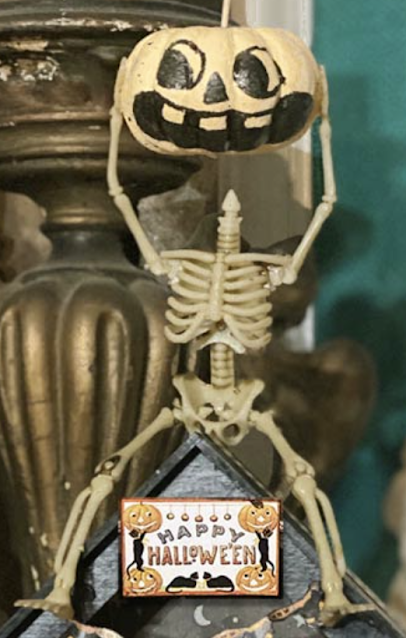 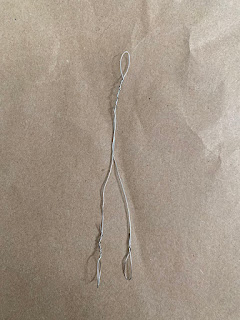 To make these you really need a heavier gauge wire than what I had on hand. I used a 24 gauge wire and really, 18 or 20 would have been better choices. Not to mention being a lot easier to wrap with paper too Than the super skinny wire I used! 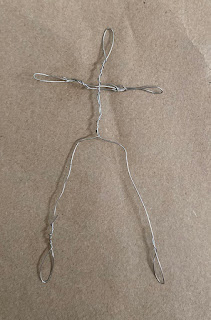 Take a length of wire about *this* long (you all know I don't measure things!) You'll want it longer than the desired size, and you can always cut it if it's ends up being too long. Fold the wire in half, wrap it around itself leaving a loop at the top. At the bottom of each leg loop it, then wrap leftover wire around each leg.
Take a shorter length of wire, create a loop on one side and wrap it around itself. Do the same with the other side, then wrap that entire piece around the "body".
An alternative is to make the body out of one piece of wire, which I find to be easier for me and it would look like this when finished (or close to it): 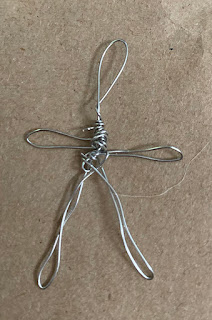 When I made these I didn't know that I'd be doing a tutorial for them so I don't have any pictures of actually putting the paper and tape onto the wire.
You'll need newspaper or thin kraft paper torn into small strips. Once they're torn, then crumble them up. My dolls were wrapped from the neck down, glue down each strip when you come to the end of it.
Once the wire is all wrapped, then you can keep wrapping to get the desired thickness. I wanted the dolls to have bellies, so I wadded up a strips and glued them down to the belly area. Once it was plump enough, and the arms and legs were done then it's time to wrap the body with masking tape. I didn't wrap the legs but you could if you wanted to.
The masking tape I had was too wide, so I just tore thinner pieces of it to use.
Here are my dolls once they were done being wrapped and glued the pumpkins onto the head loop. 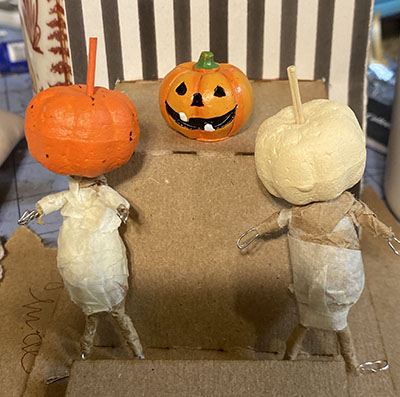 Note: Make sure to wrap the arms and feet all the way down. When I made these I didn't, and it's just easier to do it all at once. 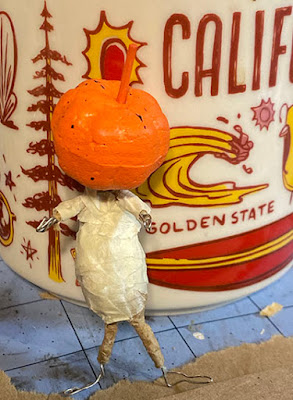 Once your doll is made, then use a felt tip marker to draw on the faces onto the pumpkins. The pumpkins are really lightweight foam and a pencil or regular pen would leave indentations. A white opaque pen was used to draw on the teeth.
To dress the boy pumpkin I wrapped seam binding around the top of the body for his shirt, and then wrapped sari silk ribbon around the bottom and legs for his pants. The bottom of the "feet" are bent so when they're painted it looks like he is wearing shoes.
The girl pumpkin's outfit is basically painting her entire body black, except for her hands, so that it looks like she's wearing a body suit. The white opaque pen was used to draw on the stripes onto her legs.
The bow on her head is made from seam binding, and her skirt are 2 flower petals from a The Dollar Tree fake flower. Pull the flower off of the stem, remove whatever is holding it together and the petals will come apart. Make a couple of tiny slits in the middle of the petals, and it should slip right onto the doll. More than likely the petals will be too long so just snip them up a bit. 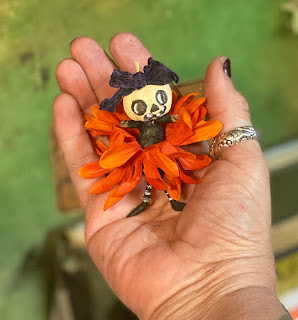 When trying to take pictures of the finished piece, her shoes just faded into the background. To fix that I used Rose Gold Stickles to make them pop out a bit. 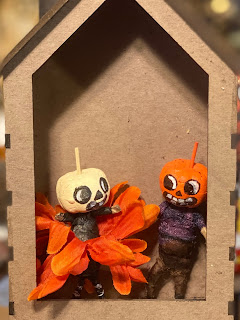 For the other supplies that I used to create the Halloween Dance Party (and the must have pumpkins!) please click:
Supply List 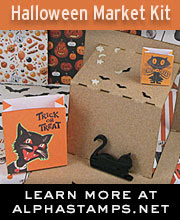 “A breath of wind from the wings of madness.” -Baudelaire

“Modernity is the transient, the fleeting, the contingent; it is one half of art, the other being the eternal and the immovable.” -Baudelaire